First and second students took part in the annual Garda basketball blitz in the basketball arena. First up for the girls was Old Bawn who had a very strong team. The girls  couldn’t match the strength of Old Bawn and were beaten 12-5. Next up was Firhouse. This was an evenly matched game with both teams trading scores. Firhouse has luck on their side a got the final winning score just as the buzzer sounded. St.Aidans were the next team the girls faced. This was a very exciting game which finished in a draw. Ana Prunker and Megan Mc Garry worked well to achieve this result. 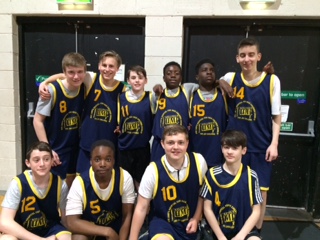 Tallaght Community school were the boys first opponents. This was a very strong TCS team won beat the KCS boys by a number of scores. Firhouse couldn’t match the strength of KCS’s sharp shooters Eoghan Molloy and Akos. KCS won 10-0.
Mount Seskin our local reveals were next up for the boys. Again KCS’s sharp shooters Luke Dingle, Gavin Byrne and Karlo Punker could not be matched and KCS won 18-0.
The boys final game was against a very strong St.Marks team. Unfortunately this team was too strong and the boys were beaten by a number of baskets.

Well done to all those involved, particularly to Anna Prunker and Karlo Prunker won both most valuable player for both teams