Due to hit cinemas on April the 3rd 2015 I Used To Live Here features a number of rising talent that attend KCS. The film, which won the Best First Feature Audience Award at last year’s Galway Film Fleadh. Have a sneak peak at the trailer! We wish Jordanne Jones, Ross Kelly and Ross Geragthy all the best in their first outing on the silver screen and definitely not their last!

Preview of I Used To Live Here in K.C.S Wednesday morning @ 11am before its cinema release on 3rd April 2015. Director Frank Berry along with a representative from Jigsaw will also be attending the special school screening.

“An important film with a heart-breaking and remarkable performance from Jordanne Jones”
Ed Smith, Today FM 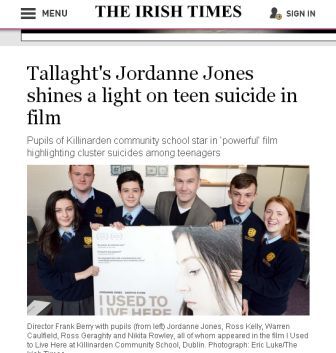